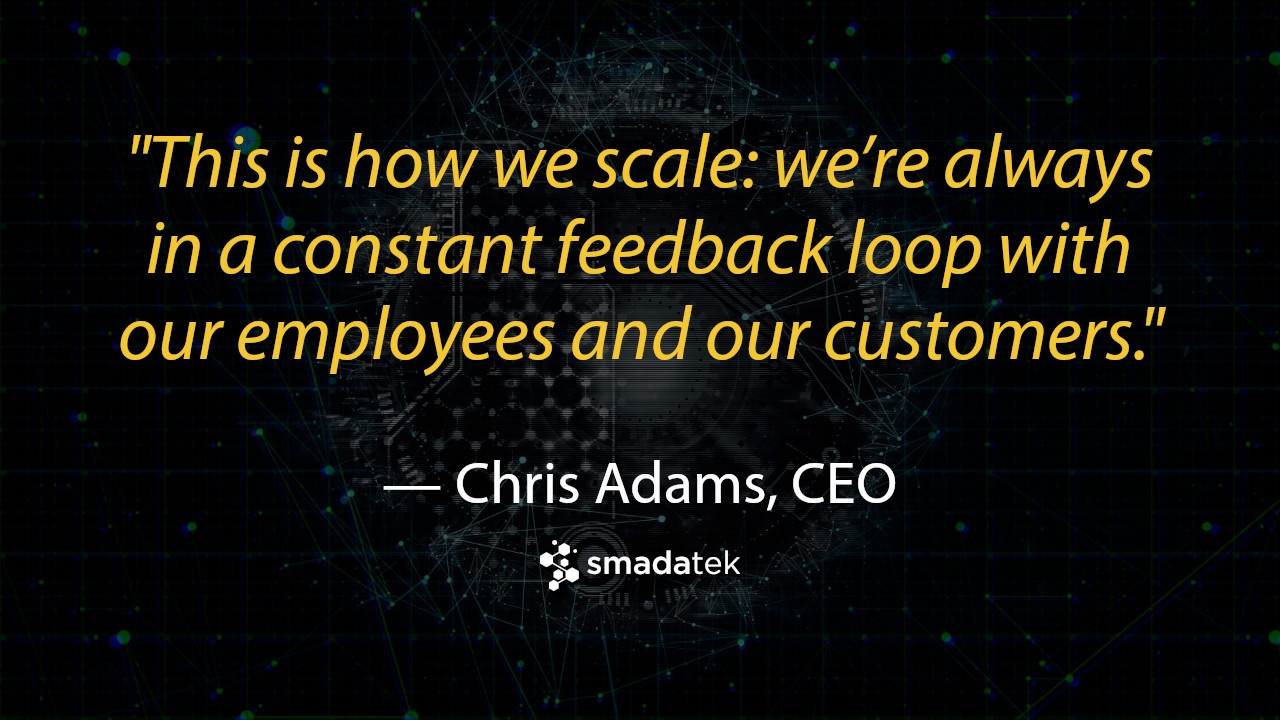 The Lost Secrets of Scalability


My name is Chris Adams president of Adams Technology Group and the smadatek team. I wanted to talk about one of the hot topics I hear a lot of people talking about: scalability in regards to what’s going on with supply chain issues and human resource issues. In other words, it’s hard to find good people.

In this quick video, I’m going to talk about what smadatek does from a scalability standpoint. One of our large customers, CFO Steve, asked me a really important question. We had just moved them to their new campus which is about four or five acres. We pulled in all their fiber, put in all new servers, put in all new switches, did the whole works for them and we do their engineering and their help desk.

As Steve and I were touring the campus after we got them moved in and did their soft opening, Steve asked me a very important question.  “Chris, how is it that you provide such great customer service and IT services to us?  How are you going to continue to provide that service as you grow, as you scale?”

Now, I’m going to answer that question and I’m going to do it in the context of what happens in our office every Friday at 11:30; we do our weekly operations meeting. What’s cool about this meeting was I was not here, so I had one of the guys run the meeting. I do this regularly.

We have our standard operations meeting template. Number one, we always open up the meeting with someone reciting what our vision statement is. Then, we have someone talk about our vision statement, and then, we popcorn around the table and we pick one of our pillars.  We have 4 pillars:  network security, business productivity, customer service and people.

Every one of our guys knows and has memorized all that stuff.  After we get done with that, then we go around and we do what we call celebrations.  These are really, really powerful things. Celebrations are something that one of the guys did personally, whether it’s in work or out of work.

Shez has been celebrating coming off knee surgery. He’s been out doing some running. Justin’s been working hard on our network security platform. In fact, we’ve got an announcement coming out soon about Layer 11.

As we get deeper into the meeting, we get into our feedback loop.  This is really important.

I want to specifically talk about what came out of the conversation with Jeremy. Jeremy’s takeaway from running the meeting was very simple.  Number one is the ability for us to have conversations, hard conversations around the conference room table.

What I teach my guys is that the events are neutral. What gives the event momentum is the reaction. I’m not saying that we’re never not going to react.  One of the things that we teach here is this concept of the power of the pause.  It’s the time it takes for you to not react, to process what’s going on and then respond.

Listen, this is really important for us.  We’re in the world of IT where people call us, they’re frustrated, and emotions can be a little bit elevated. A lot of our customers have called into us, and they don’t have the same stigmatisms as they would with other IT shops.  They know that they’re going to call into us and we’re going to get them taken care of, but some people still call in because they’re frustrated, and we get that.

The thing for us is we understand that people get frustrated. We know it’s not about us. We know the system, or the problem is neutral, and we’re not going to react to that. That was one of the cool things. Now, with the event being neutral we still have to have a way for us to have conversations for us to get better. I want to think about this as a concept. King Arthur did this with the knights. He had knights of the round table and this concept of everyone came to the table and they were an equal.

We put the events on the table, and we get to work through them. I thought what was really cool from Jeremy from an observation standpoint was the fact that those things are just neutral. We have internal customers which are employees and we have external customers.  We serve two customers. The most important customers that we serve are each other; our internal customers.

Through this meeting, we get to do that. We just don’t say people over profits, it is people over profits. We have a way for us to work through this stuff.  It’s very important. The number one observation that Jeremy had was the fact that we come together and we’re going to have conversations.  We have the hard conversations but it’s the way that we handle those things that matters.

The Interplay of Doing and Being

Sometimes we as CEOs and presidents, and as engineers, and as dads, and as husbands and friends are we get so caught up in the do.  Maybe you roll through your task list or to-do list and you look at, “What did I get done today?”.

I personally went through this too because as you can imagine, I’m kind of a doer.  It’s through my leadership journey that I found it’s really important to understand who you get to be when you’re doing those things.

One of the pillars that we have here is people, and the first sub pillar on that is empowerment. We love to empower our customers. We give them the facts and we ask them, “What do you want to do? What’s best for you?” and they love that.

The other thing that I talked to Jeremy about is what empowerment looks like in our organization. We make a lot of decisions in our organization, but we really make them together as a team.  It’s one of the ways that we continue to innovate.

We innovate from the demand side, not from the supply side. Basically, we innovate based on the things that our customers need from us. It comes from this operations meeting because we’re always listening to what our customers are saying. We’re also listening to what our employees are saying.  That’s what I’m doing and that’s what Jeremy got to do during the meeting. It’s really powerful.

Empathy is really important and it’s a sub pillar in pillar number three for customer service. We have to be empathetic when we’re dealing with problems.

Every Team Member is a Leader

That’s how we scale.  I asked Jeremy, “How were you? How was it for you to lead the meeting?”  It’s important for me to understand that. We’re a small powerful firm.  We’ve got nine guys but as we grow and scale, it’s important for Jeremy because he’s going to have his own team.  This is the template whether he’s talking to us or he is talking to his own team.  It’s the same thing.  Those things that he’s going to be talking about are going to be in 100% alignment with what we’re doing.  So that’s the secret for us in scaling.

My job isn’t just to sign checks, my job isn’t to hire people on. My job is to build leaders, that’s how we scale. If I’m not going to be here, someone else is running the meeting.  That gives them an opportunity to lead and that’s how we scale.  Right now, I have no idea what the next six months is going to look like for us.  I will tell you that we have the processes in place now to handle all that growth, because we focus on taking care of our internal customers.

We have this feedback loop that we’re looking at all of our processes.  When we look at those things, that’s what makes us better. It’s this constant feedback loop of everything that we do.  The second part of that is: it’s not so much what we do, it’s who we get to be when we’re doing it.

That’s the interesting thing that we do for our operations meeting. I will say this, our door is always open.  If you want to come into our office and you want to sit down and you want to just see how it rolls, you’re more than welcome to do that!  Just shoot me an email to cadams@smadatek.com.  You can also pick up the phone and call me and say, “Hey, Chris, you know what? I think that’s really interesting could I come in and see how you roll and could we talk about it?” Absolutely!

I think one of the things that we have to understand as owners, CEOs, presidents, whatever title you want to call yourself, is we have an opportunity for us to really create an environment to make people better people.

I want my guys to be the best versions of themselves because if I can help them, it creates a ripple effect, it creates a vibration. If I can teach Jeremy or any of the guys to be a better person, to understand the difference between reacting and responding, how do you think that that’s going to roll out in his personal life?

It’s not just here.  Is that going to make his personal relationships better with his parents, with his family, with his friends? Absolutely! That’s what we have in our organizations.  We have an incredible platform to help people be better people.

As leaders, when we help people be better people, everyone wins. Everyone.  I think that’s really powerful.  So that’s the answer to: How do we scale?

That’s what I’ve got from a leadership standpoint, from a scalability standpoint, and from a humanity standpoint.  Let’s get out there as owners, as presidents and as CEOs and help people be the best versions of themselves.